This is an excerpt of a piece written originally for course work at CSU. We hope you’ll find this as insightful and thought-provoking as we did, in whichever stance you find yourself and your work situated in.

For most aspiring social workers, their goal is to do their best to help those whom are less privileged than themselves. Those who are at the brunt of systems of racism, sexism, classism, and ableism, among others, often find themselves working with social workers to navigate the institutions meant to help buffer the experience of such oppressions.

Typically, social workers’ objective is to assist those they serve to exercise total self-determination by providing as much relevant information as possible. They act as an advocate and interpreters in interactions between their clients and various agencies/organizations. As a result of their partnership, those navigating systems of oppression can experience more freedom. Despite the idealism of many aspiring social workers, the field is sometimes quite contrary to the values they word towards.

At CSU, the content of the curriculum in the School of Social Work prevents students from developing the necessary skills to work across differences towards a productive and mutually beneficial goal.

For students in the program who are themselves the object of oppressions, such as students of color, the program teaches them lessons about working with their own families and communities that are in direct conflict with their knowledge of their people.

The Origin of Ethnic Studies and Women and Gender Studies

Ethnic Studies and Women and Gender Studies (ETST/WS) are fields of education with a distinctly different origin story than social work.

ETST/WS were created by diverse groups of students of color who put themselves in physical, emotional, and legal harm for the opportunity to be taught by and about people like themselves (Eric Ishiwata). Ethnic Studies programs were created by students of color, experiencing oppression in many forms, so that they may be reflected in their own education. The field remains rooted in the experiences of the oppressed, and it’s goal is to provide interdisciplinary education for all those who wish to better understand social, political, economic, and environmental domination and subordination.

The Origin of Charity & Social Work in a White Supremacist, Colonial United States

Fields like social work originate in European charity work (Gandy). As they were developing in the context of what is now called the United States, they became tools for colonization through which elite white people could enter communities of color, Indigenous communities in most cases, declare themselves experts on those communities, and proceed to deconstruct their cultural integrity.

Understanding this history is crucial because social work scholarship and practice frequently repeats the same oppressive, genocidal actions of its history. 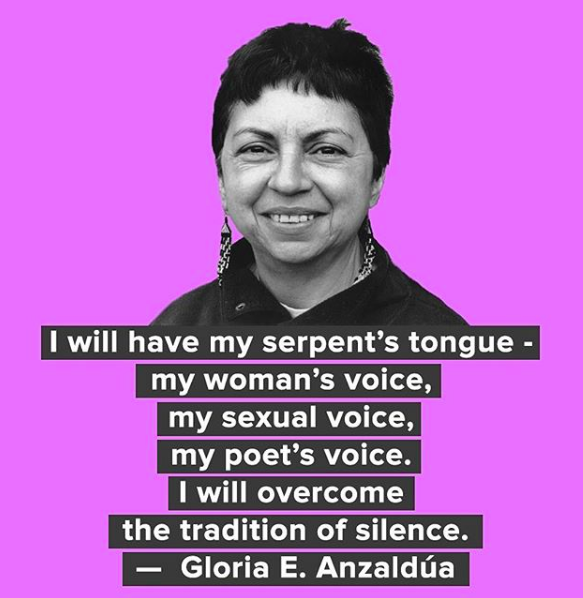 In Gloria Anzaldúa’s Borderlands/La Frontera: The New Mestiza, Anzaldúa discusses the “mental nepantilism, an Aztec word meaning torn between ways,” experienced by la mestiza (99). Mestiza/o is the Spanish word which translates to “mixed person” and is typically used to refer to people of mixed Spanish and Indigenous ancestry.

La mestiza experiences a tearing of her mentality, Anzaldúa argues, because she is of mixed race and mixed culture, which are frequently, if not always, in conflict with one another.

As a result of dichotomous and hierarchical racial relations in the United States, la mestiza has been forced to live the border between whiteness, Indigeneity, and the racialized identity of “Latino.” Inherent in her existence is the clash between bodies and cultures, which results in mental nepantilism and the construction of a new consciousness.

Anzaldúa identifies three overarching modes of consciousness experienced by la mestiza: the stance, the counterstance, and a third space. Each is distinct in its origins and goals, and has different effects on the individual, their communities, and their societies.

The stance consciousness is entrenched in the status quo, the normalized, and the oppressive. The stance accepts the dichotomous and hierarchical structures that define the dominant culture. In the United States, it represents complicity in white supremacist heteropatriarchy.

For la mestiza, this may mean accepting the trauma of detribalization and Americanization as an objective fact of life, the belief that there is no history to contend with, and that her pain is an individual obstacle as opposed to a symptom of oppression. In a Social Work classroom, this may look like an overtly or covertly racist comment going unchecked or being accepted by the class as correct because no one in the room provides an anti-racist counternarative.

The counterstance is a means of defense, a survival mechanism, which allows us to break away from complicity in oppression and begin to work against it.

I took the counterstance when I positioned myself as intellectually and morally opposed to the School of Social Work, often in conflict with my professors and advisors.

“A counterstance locks one into a duel of oppressor and oppressed; locked in mortal combat, like a cop and the criminal, both are reduced to a common denominator of violence” (Anzaldúa 100).

Slowly, it will drive one to exhaustion and burnout.

Since the stance is inherently oppressive, and the counterstance is unsustainable, movement toward a new consciousness, a third space, la conciencia de la mestiza, is necessary if one wishes to thrive while in the borderlands between conflicting cultures. Anzaldúa articulates that:

At some point on our way to a new consciousness, we will have to leave the opposite bank, the split between the two mortal combatants somehow healed so that we are on both shores at once and, at once, see through serpent and eagle eyes. Or perhaps we will decide to disengage from the dominant culture, write it off altogether as a lost cause, and cross the border into a wholly new and separate territory. Or we might go another route. The possibilities are numerous once we decide to act and not react (100).

Third Space as a decolonizing tool

Although clearly applicable and important in the lives of mestizas and all those who find themselves in the borderlands; stance, counterstance, and third space as a conceptual framework may be applied to those in fields whose practices are historically intertwined with a dominant culture as well, as described above in the very different origins of social work and ETST/WS.

In his book The Third Space of Sovereignty: The Postcolonial Politics of U.S.-Indigenous Relations, Bruyneel argues that a third space can help us better understand the experiences of Indigenous Nations as they struggle to establish and exercise self-determination in the U.S.

“In resistance, indigenous political actors speak against and across boundaries of colonial rule by articulating and fighting for a third space: a space of sovereignty and/or citizenship that is inassimilable to the modern liberal democratic settler-state and nation” (Bruyneel 217).

In this case, the stance is the nation-state’s understanding of borders in both space and time that are inflexible and authoritarian. The counterstance is an understanding of sovereignty ambiguously in space and time. The third space of sovereignty is, therefore, a mutually-beneficial approach to self-determination of Indigenous peoples, their land, and their position in U.S. politics that is both ambiguous and legally defined.

Shifting your consciousness to thrive inside of the dominant stance

In the School of Social Work at CSU, practice is grounded in western, Eurocentric epistemologies. Research remains rooted in quantitative understandings of human experiences, communities of color are framed as uneducated and in need of saving, practitioners are positioned as experts who are armed to do the saving, and self-determination is valued mainly in terms of the individual and only within the parameters of rights and liberties determined by the nation-state.

Much of the school’s perspective and approach to practice reflects the values of the dominant culture. Therefore, students of color within the School of Social Work find themselves walking the border between what they know to be true about themselves, their families, and their communities; including what they know, can do, want, and need; and the way that the social work program sees them.

They must contend with conflicting understandings of who and what they are in the context of a field and school that are white in consciousness. They experience the dissonance between the lenses through which the School of Social Work sees their lives and the reality of their experiences.

Anzaldúa’s third space consciousness is an effective framework for understanding students’ of color experiences in the School of Social Work because, like la mestiza, they are caught in the borderlands between two conflicting worldviews.

Whereas some students of color may take the stance and participate in the practice of social work as it is taught to them at CSU, others may choose to take a counterstance and work against what they have been taught. They may also choose another route, of which there are many. They may move their consciousness in and out of stance and counterstance towards a new consciousness where they may thrive in a field that functions to maintain their subordination.

Bruyneel, K. The Third Space of Sovereignty: The Postcolonial Politics of U.S.-Indigenous__Relations. University of Minnesota Press, 2007.