A statement by the Fort Collins Homeless Coalition 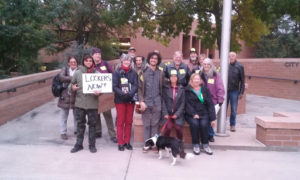 Community members showed up outside of City Council to rally in support of 24-7 lockers last Tuesday.[/caption]

Last Tuesday, City Council approved the small lockers project at the Fort Collins Mennonite Fellowship (FCMF), but with new conditions that impose an absurdly heavy burden on the church. FCMF is committed and resourceful, so perhaps they will find some way to continue to meet this need in our community. But this decision reflects deeply-held prejudices on the part of our elected leaders that must be addressed.

City Council imposed two new burdensome restrictions on the lockers program: restricting the hours of operation to 6am-8pm, and requiring supervision while the lockers are in use. These restrictions are based around two presumptions: that simple human acts, such as storing belongings, become inherently dangerous when homeless people do them; and that homeless people aren’t fully competent to make their own choices, including when to access their own possessions.

No other properties in the area, with the possible exception of those serving alcohol, face a similar restriction on operating hours. Residents with housing are free to access their house and belongings 24/7. Nearby ATMs are accessible 24/7, and customers are trusted to make their own decisions about when to access them. The public library’s book drop and an all-hours public restroom are both just a block away from the lockers, and have unrestricted hours.

What is different about the lockers? Not their use to store items – personal possessions are stored in residences, money is stored in ATMs, library property in the book drop, etc.. The difference lies in the people using the lockers, and the assumptions City officials are making about them.

For decades, Americans have been taught to think of poverty as a moral failing on the part of poor people – something that results from bad choices or bad character. In fact, poverty, inequality, and homelessness result from public policy decisions on the part of elected leaders. Our current wave of mass homelessness began when the federal government drastically curtailed funding for public housing and related programs in the late 1970s and early 80s, and has been extended by subsequent policy decisions.

Prejudice and paternalism prevent people from identifying or contributing to humane solutions. The stereotypes around homelessness are apparent every time we have a “community meeting” on any related topic.

Again and again, we hear self-proclaimed “concerned neighbors” express fears similar to those used to exclude other marginalized groups throughout history – that crime, trash, danger, decreased property values, and untold social harms are caused by the mere presence of people who belong to a stigmatized group.

There is no research or evidence to back up any of these claims. Rather, the fears and tears of “concerned neighbors” are framed around dehumanizing stereotypes and the language of victimhood. These fears are used to argue against practical solutions, identified by people who are simply trying to survive and make a living in an increasingly unaffordable city.

Evidence demonstrates that people of all income levels commit crimes and engage in dangerous behavior. However, when the news reports on a crime committed by a domiciled person, they rarely (if ever) mention their housing status. But when the news reports on a crime committed by a person without housing, the headline often includes a description like “homeless” or “transient.” Similarly, when Fort Collins’ City Council gets updates on homelessness from their staff, the reports always place a strong emphasis on crime (sometimes euphemized as “disruptive behavior”) – helping reinforce the false idea that there is a relationship between housing status and supposedly criminal behavior. No front page story in The Coloradoan, or presentation by City staff, has ever led with the information that mass homelessness is a public policy decision, one that we could change by working together.

On Tuesday night, we saw our elected leaders accept claims that homeless people are inherently criminal and dangerous as the basis for limiting necessary services. At no point was any evidence introduced to support the idea that lockers give rise to any safety issues. The Mayor even asked repeatedly about camping tickets on the property, without explaining how sleeping creates a safety issue, much less how sleeping is caused by lockers.

Sleeping is a necessary act of human survival that causes no harm to others, but is precisely the kind of behavior that becomes criminal when engaged in by a person experiencing homelessness.

Stereotypes, stigma, and paternalism contribute to bad public policy and human rights violations in our community. These are serious and real concerns, which lead to  injustice and perpetuate the criminalization of poor and unhoused persons. The same logic that led City officials to limit the lockers informs policy decisions to criminalize homelessness and cut social services. Practical, humane solutions are overlooked, or blocked by wildly disproportionate controversy. Our community deserves better than this.