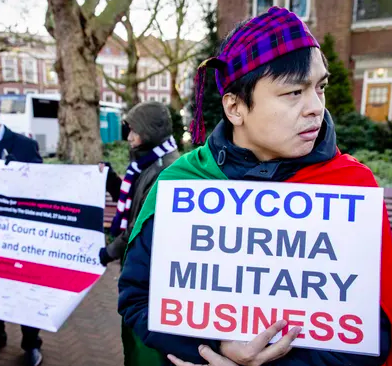 For more information about New Belgium sell out check out this wonderful article by the Guardian here. It’s sad that this is how Fort Collins makes international news headlines.

It is with great distress and outrage that we write you on the backdrop of the 71st anniversary of the United Nations Universal Declaration of Human Rights.

The sale of New Belgium to the conglomerate of Lion Little World Beverages and Kirin is shameful. You must certainly know that Kirin has been internationally condemned for its human rights abuses and connection to ethnic cleansing in Myanmar. How dare you connect the Fort Collins community with such a deplorable corporation.

The United Nations High Commissioner for Human Rights described the attack on the Rohingya as a textbook example of ethnic cleansing. Because of the donations that Kirin made to the Myanmar military at that time, Amnesty International called on the Japanese government to investigate Kirin for criminal misconduct.

While confusion is inherent in navigating the relationships between these multinational business conglomerates and military governments, the information is available with three clicks on the internet. We are deeply distressed that you are willing to engage in such violent, brutal business practices and sell us out in the process. We are horribly offended that you did not think the community of Fort Collins would learn about and oppose such behavior.

As we read “A Letter From Kim” on your webpage, we wonder how you can claim you are “dedicated to being a force for good as a business” when you are about to partner with a beer giant accused of funding genocide against the Rohingya in Myanmar.

As we read your November 19th press release, we wonder how you reconcile your “crazy enthusiasm for being a business role model” with being a business partner that funds a military that rapes and kills children.

We do not wish to find ourselves in the same situation as those in the UK, who were unknowingly contributing to Myanmar’s armed forces because they were drinking Kirin beer, therefore responsible for ethnic cleansing. We urge you to do the right thing. We demand that you stop the sale to Lion Little World Beverages and Kirin.

Until you stop the sale, we call for a complete boycott of your beer.