“We urgently need to bring to our communities the limitless capacity to love, serve, and create for and with each other.” 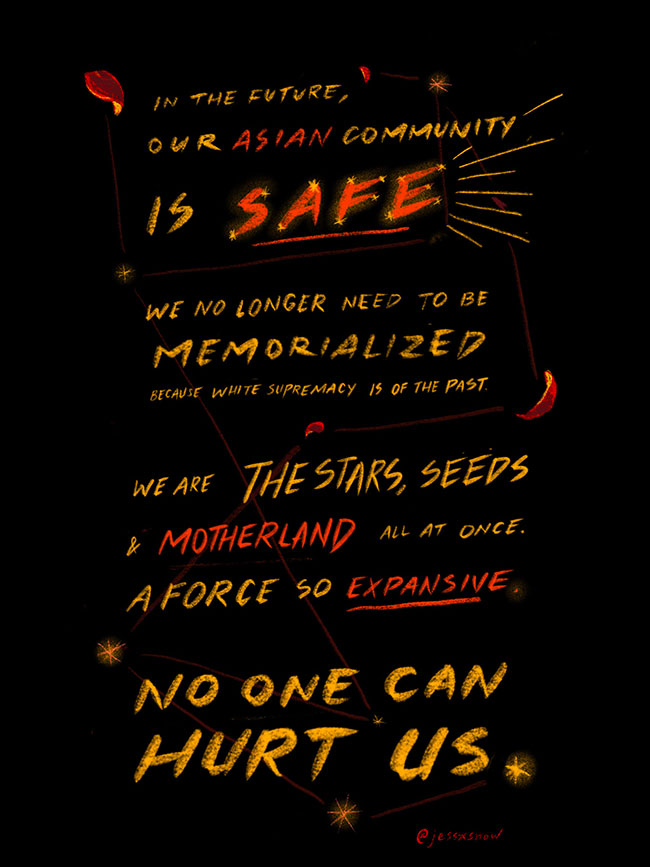 These are some extremely painful times. The violence of white supremacy, misogyny, xenophobia, anti-blackness, violence against elders, anti-sex work, capitalism, the racist police state are killing us.

I am heartbroken by the acts of violence that occurred on the evening of March 16 in Atlanta. Eight people were killed at three separate spas. Six of the people killed were Asian and all but one were women. With friends (many of them working class, Asian American) in Atlanta, and as an Asian American woman, this attack hits too close to home. As I’ve been connecting with family and friends in the Asian American community, much of the despair and grief we share come from a deep well, that the violence our community is subjected to in this country is nothing new, and the broader context of these shootings cannot be ignored.

The shootings happened under the trauma of increasing violence against Asian Americans nationwide, fueled by white supremacy and systemic racism. While anti-Asian violence is woven throughout our nation’s history, the Trump administration’s relentless scapegoating of Asians for the ongoing COVID-19 pandemic has significantly increased the incidences of hate and violence against Asian Americans around the country.

Anti-Asian hate crimes have surged 150% since 2020, with Asian American women twice as likely to be targeted Stop AAPI Hate has received 3,800 reports of anti-Asian hate, with 35% of discriminatory acts happening at businesses and with women reporting hate incidents twice as much as men. And none of these incidents are isolated. They are a part of a larger racist history and culture that continues to play out until we choose to stop it. Here’s an extensive toolkit for anti-Asian violence actions and resources.

The police and mainstream media response to this tragedy has only underscored how white supremacy is rooted in power structures like the media and law enforcement. The white, male perpetrator of these crimes is claiming that his desire to end his own “sexual deviance” motivated his terrible actions targeting Asian American women.

This wrongful narrative lies at the intersections of racial and gender oppression. By furthering the hyper-sexualization of Asian women, these narratives only exacerbate unsafe working conditions and fear of seeking resources and support. These women were especially vulnerable as low-wage, sex workers, already risking their health to work during the pandemic. We must advocate for infrastructure and resources that prioritize community safety, a robust social service safety net, and in-language support.

I deeply desire and hope to hear more about the Asian women’s stories, and less about the rationalization of the shooter’s motives. He has already taken enough, let alone more of the narrative. May we let the women’s families and experiences fill our hearts, and inspire our next moves.

Let us move forward from here by centering victims and their families, including financial and community support. We center safety for all - this does not mean bringing more law enforcement into our communities. And we unite against white supremacy.