María Lugones passed away on July 14th, 2020 early in the morning. Her writings and work taught me, and so many others, how to think and be in resistance, how to dwell in coalition, and every important lesson about queer love and queer worldmaking.

Since I first heard about her struggle with cancer and subsequently her death earlier this summer, I have been reflecting on both her generosity and playfulness that shape her writings. In 1987 she wrote, “I am not a healthy being in the ‘worlds’ that construct me unplayful.” She goes to express how she was “scared of ending up a serious human being, someone with no multi-dimensionality, with no fun in life, someone who is just someone who has had the fun constructed out of her. I am seriously scared of getting stuck in a ‘world’ that constructs me that way. A ‘world’ that I have no escape from and in which I cannot be playful.” 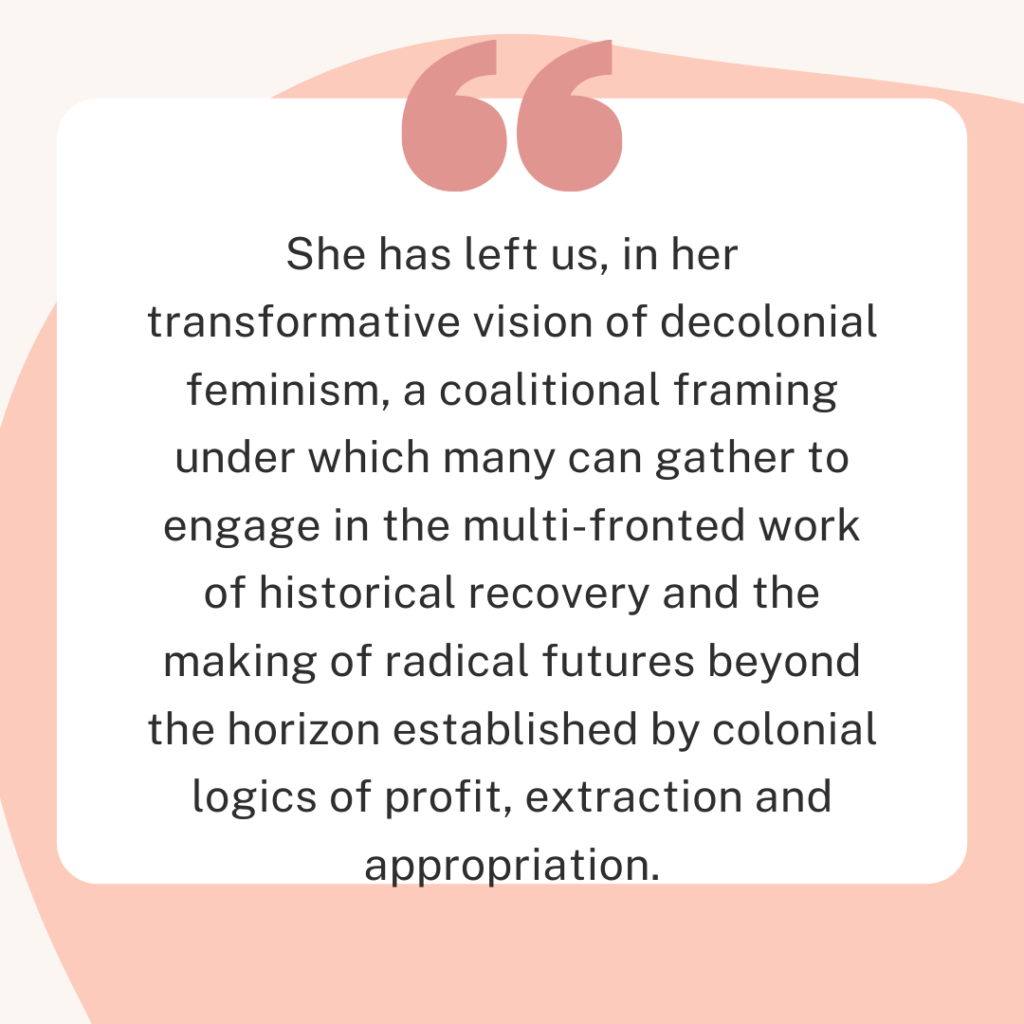 Living through these times where there is such a concentrated amount of grief and death and rage, building and traveling to a world that is free of violence and domination feels like both a responsibility and a luxury. Both a defiant act, and an everyday practice of playing with and strengthening my imagination of what’s possible. Lugones’ very specific sense of world traveling: not touristic, not exploitative and appropriative, but rather about marginalized subjects intimately learning one another’s worlds is how I’ve come to be in relationship with those I’m grateful to call my chosen family, my queer family and friends.

She wrote, in 1994, “I ask myself who my own people are. When I think of my own people, the only people I can think of as my own are transitionals, liminals, border-dwellers, ‘world’-travelers, beings in the middle of either/or. They are all people whose acts and thoughts curdle-separate. So as soon as I entertain the thought, I realize that separation into clean, tidy things and beings is not possible for me because it would be the death of myself as multiplicitous and a death of community with my own.”

For Lugones, coalition was curdled-separation: a decision made by multiplicitous and impure selves to come together in order to resist the splitting and fragmentation that occur when one is embedded in worlds that fetishize purity, and to further curdle through their intimacies with one another.

And then turning to her writing in Pilgrimages/Peregrinajes (the only book she published over her very long career) during a time of pandemic, social distance, and the deep longing for touch and body-to-body connection this context has engendered is devastating. She believed so deeply in the transformative potential of embodied community building and collective action. She believed in the imperative of presence.

She understood that everyone has work to do in order to be in present and real. During my time at Colorado State University, I was a GTA for several courses in the ethnic studies and women’s and gender studies program. Some of the issues we were struggling with then — systematic targeting by university administrators, developing pedagogies that enabled predominately poor, multiracial, first-gen students to grapple with questions of intersectionality and the entanglement of racial, gender, sexual, and economic justice, and building beloved community in and through enmeshed spaces of extensive structural violence — necessitated bringing every lesson her writings ever taught me to bear.

Much ink has been spilled lately about feminist rage, about its use values, about its clarifying impact, about its ability to prompt radical shifts and fuel the psychic and physical breaks necessary to divest from toxic relationalities, both institutional and interpersonal. But precious little has been written about how to survive the consistent recurrence of rage, and what kinds of supports need to be in place to endure. I return again and again to her work to sort through this, and again and again to my memories of the spaces cultivated with my time in academic spaces pushing against the academic business-as-usual.

In her essay “Hard-to-Handle Anger,” Lugones theorize what it means to experience foreclosed and illegible anger, anger that resonates within dominant worlds of sense as irrational, non-sensical, and thus dismissed. She calls this the kind of anger that “recognizes this world’s walls. It pushes against them rather than making claims within them.”

Her life’s work exhorts us to intervene on every front: to challenge the masculinist biases of decolonial and radical left thought, to articulate and enact resistances to Eurocentric and White-dominant modes of feminist activism and epistemology, to perpetually queer conceptions of kinship and collectivity.

She has left us, in her transformative vision of decolonial feminism, a coalitional framing under which many can gather to engage in the multi-fronted work of historical recovery and the making of radical futures beyond the horizon established by colonial logics of profit, extraction and appropriation.

The spaces we navigate in community building work are often toxic- simultaneously poisoned and healing. In her life’s work, Lugones always insisted on the necessity of understanding ourselves as permeable and open, always already steeped in the waters we inhabit and traverse. As we continue to navigate and swim across borders imposed on us, let us hold closely to the wisdom Lugones has gifted us and may she rest in power.